While the city continues to reel from the assault on a conflict-resolution specialist by a student at Bartram High School, we must look at the conditions that allowed it to happen and what can be done about them.  Dangerous things can happen when you mix increasing enrollment with dropping staffing.  In the 2009-10 school year, Bartram employed about 166 staffers.  The school has been forced to cut staff every year since then.  This year that number is down to 97, a more than 40% drop since 2009-10.  That’s despite having more than 100 more students than last year.  But the problem isn’t just the cuts, but who got cut.

Many of the cuts have hit the already stretched support and discipline staffers.  PCCY’s analysis found that Bartram lost two of its three assistant principals, three of its five counselors, all four of its supportive services assistants, all three of its community relations and social services liaisons, its sole librarian, nearly all its bilingual counseling assistants, its at risk student support, one of its two school nurses, one of its six school police officers and its entire cafeteria staff.  But the move that puts students and staff most at risk might be the drop in noon time aides—the people who keep order in the school, in the cafeteria and in the halls between classes—from 64 man-hours a day down to 20.  That’s five people, working just four hours each, responsible for more than 1,000 students. 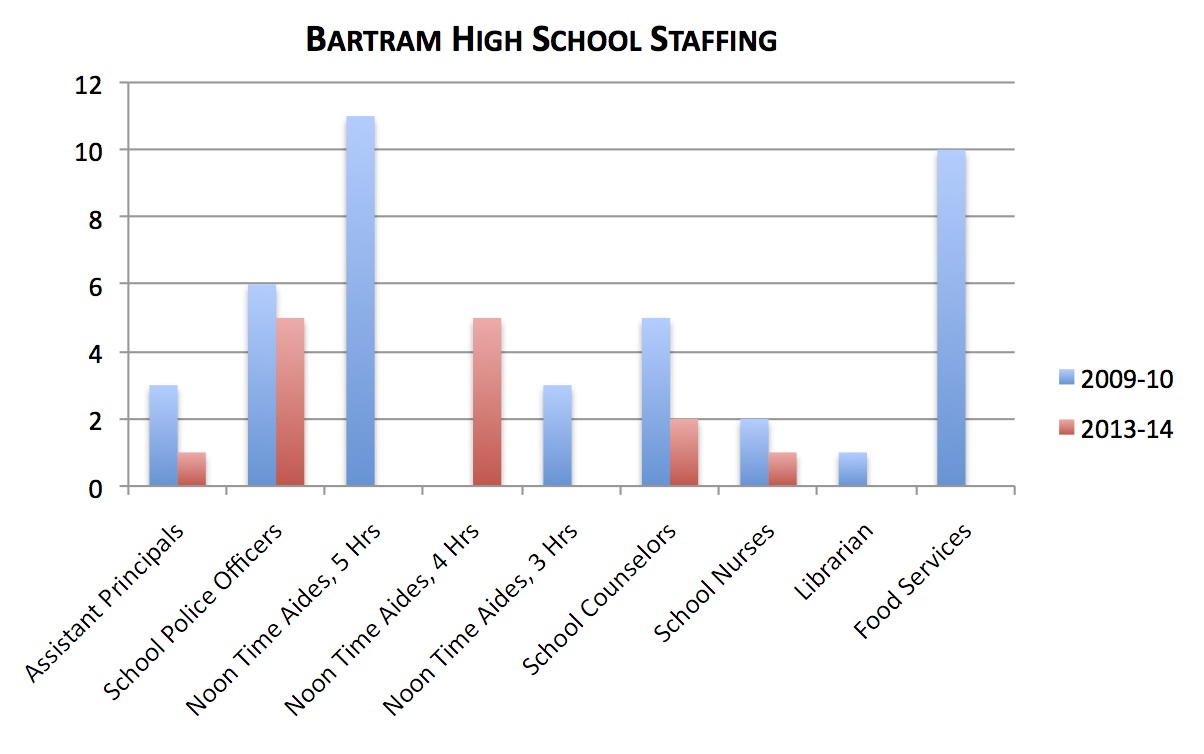 Obviously, the School District of Philadelphia didn’t want to make these cuts, at Bartram and elsewhere, but felt that it had to in order to save money.  But did it?  The District is in the process of converting two schools, Steel Elementary and Muñoz-Marin Elementary, into “renaissance” charter schools.  But it’s not as simple as handing over the keys.  Newsworks reports that it costs the District $4,000 per student to convert a school into a renaissance charter.  “To be clear, this isn’t money that will pour additional resources into Steel or Marin, but instead, fund the overhead costs associated with the decline in district enrollment.”  That’s $5.1 million to convert the two elementary schools.  If improving the conditions at Steel and Marin is worth eating more than $5 million to the District, why can’t they find the money to keep Bartram safely staffed?  More importantly, why is the state putting the District in a position in which some schools must suffer?

The District has many schools with conditions it needs to improve.  But year after year of underfunding from the state has left the District between Scylla and Charybdis; if it moves to avoid one problem it gets stuck with another.  We cannot pit one school against another.  Everyday, students and teachers file into understaffed schools.  If we are serious about creating a safe environment and vibrant curriculum for our students and teachers, then school funding should be the number one priority for the state.  Funding must be made available, balancing the budget by laying off support and discipline staff only leads to more problems.  Hopefully the state realizes this before the next incident.
Posted by The PCCY Blog Spot at 11:34 AM

You've got that right! Bartram used to be difficult but safe (with qualifications). This year the staffing cutbacks have made the environment increasingly chaotic as students push the perceived boundaries to find there is little if any consequences to their actions.

From an anonymous school teacher, scared to post under their own name.

Public Citizens For Children and Youth


Locate and click on "COMMENTS" at the end of the appropriate posting.

You'll be directed to a space with instructions to “Leave your comment.”

(If this is your first posting, you’ll be asked to create a Google Account -- Provide email address, and create and retype a password of 8 characters long. Choose a “display name,” -- i.e., your name, your initials or other moniker. Follow instructions to verify yourself as a legitimate blogger and indicate that you’ve read and accept the 'terms of service.' Click “CONTINUE”.)

Do I have to identify myself?

Yes and No. This blog does not allow anonymous comments, but does allow you to be identified on screen by your “display name.” This is the name you provide when you create your Google account prior to posting (see "How do I post" heading). It’s up to you to provide the “display name.” It can be your actual name, your initials or a name you create by which you’d prefer to be identified.